L.O.S. (Lack of Sleep).  It’s a disease that strikes the hardiest of fly fisherman this time of year. Red, puffy, blurry eyes, and an almost Zombie appearance are typical symptoms.  Luckily for those who are afflicted, there is hope…and a cure.  The remedy is to simply catch a trout!  Some may argue that no ordinary trout will do, and it must be in the 20 inch+ bracket to qualify as the needed prescription for rest and a return to normalcy.  But, in all actuality, any trout will do.  How can one disagree with the wonderful connection between man and nature when the colors of a trout held in ones hand are truly a sight to behold?  Not to mention the sights, sounds, and smell of the river corridor.

I also find it amazing how resilient the human body can be to L.O.S.   After a somewhat extended period of time (more than a week), your biomass adjusts to the rigors it’s being extended and subjected to, and everything comes back into focus.  Or, at least it seems that way.

While on a float last night, we did manage to pick up one nice fish that was feeding on iso spinners just before dark around 9:15, and had a much bigger one come unzipped.  We used a #12 Ron’s Mahogany Drake, and the fish took it on the first cast.  I developed this pattern in the summer of 2000, and have been tying and fishing it heavily since its inception.  Some of the local guides have been picking this fly up from me over the years for their floats, and one guide in particular has dubbed it the “magic fly”.  A  client of mine has also fished it all over the world, and once on a trip to Argentina, armed with 10 dozen of them, out-fished their local patterns using that fly.  In fact, his guide, lacking in good English speaking skills, called it “The American Fly”, and insisted that he fish it the rest of the week because it hammered fish so well and floated like a cork in their fast waters. 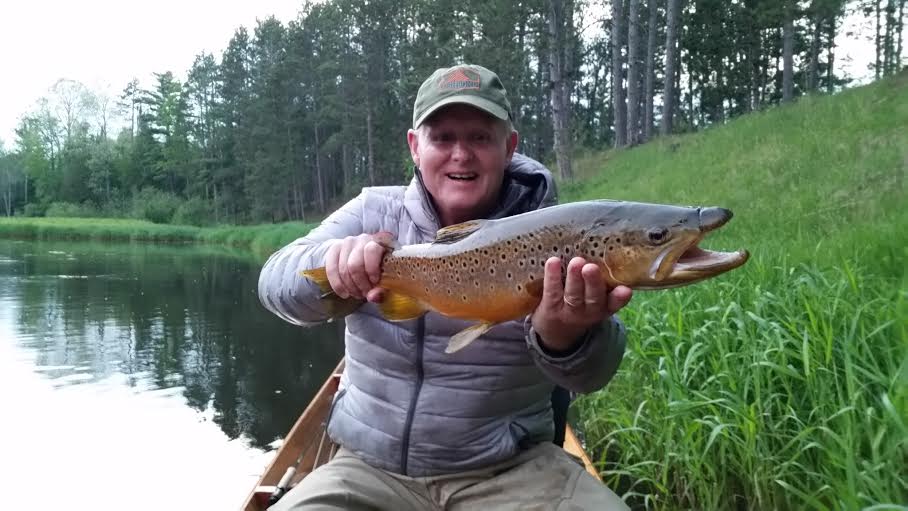 Paul Matthews with a nice AuSable mainstream brown caught on 6-1-16.

As for having fish becoming unzipped, leaders and tippets are sometimes no match for the trout’s teeth, and part of the battle in deciding what size leader or tippet to use can be challenging.  I have found that if you can put the tippet through the eye of the hook, then you’ve made a good choice.  Presentation or delivery of your fly is key.  Case in point, we fish #14  Para Borcher’s using a 3X tippet during the Hendrickson hatch with great success.  Sure, it can be a bit of a challenge jamming the tippet through the eye, (cut your line tip on an angle with your nippers), but the increase line strength is worth it if you hook into that fish of a lifetime.

The Brown Drake hatch did not occur where we were last night, or at least in the time frame we were there.  Trying to figure out when and where flies will hatch can be difficult at best.  One thing is for certain at the moment…drakes are now hatching system wide– for the most part.  There may be a section or two that have not started yet, but, by this weekend, the hatch will be more widespread. 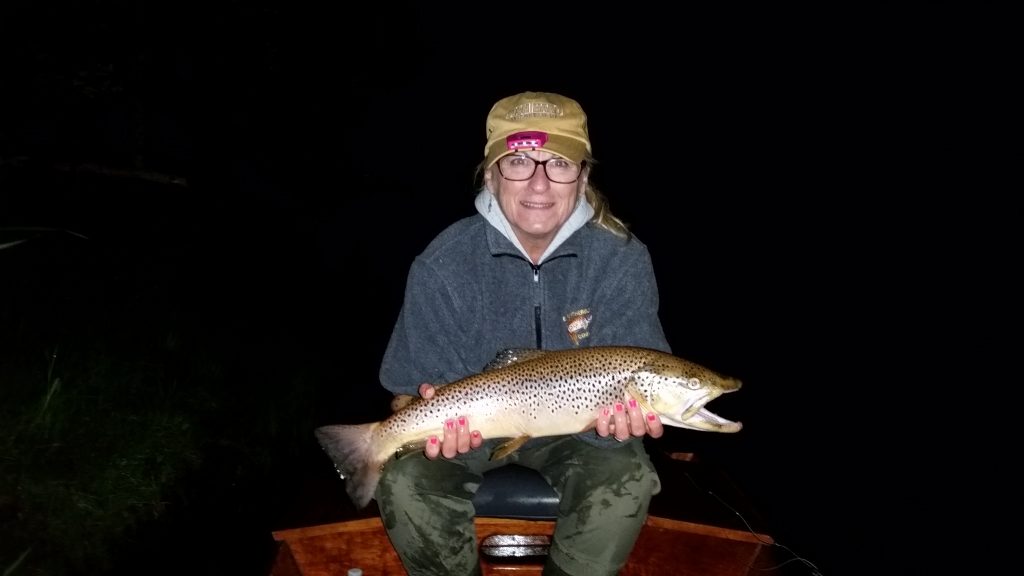 Be sure to stop in and check out our fully stocked shop.  We can also be reached at 989.344.2700.  Remember– there is no substitute for being out on the river testing and fine tuning your skills!

Closed for the season. We can be reached by leaving a voice mail at the shop. 989.344.2700. Thanks, and thank you all for another wonderful year! We’ll see you in the Spring!